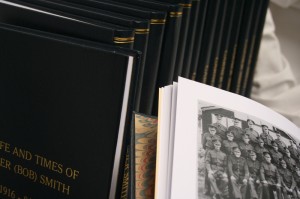 “The places, people and stories documented in this book form the footsteps which lead up to where we grandchildren now stand. These pages contain more than just tales from the past, they tell of the strands from which our own identities are woven… Getting a better grasp of our family history should serve to remind us how our past informs our present whilst never constraining our future. I am immensely grateful to everyone who contributed to this book for having recorded their piece of our common heritage.”

“Just a little note to say that I finished reading through the first draft and found myself laughing and crying throughout. Solemn also at times reading Jim’s stories relating to his war experiences. There are some really moving chapters where I really felt you had captured the sweetness of Jim and my relationship.  It was really touching to have some very precious experiences recorded in print and ‘immortalised’ in a way by the fact that they will be put together in book form. Thank you for your work.”

“I sat on the train absorbed in the printed text clutched in my hand and was privileged to be transported back in time to snatches of Nanna and Poppa’s lives as they were, in that way that a good book makes you forget where you are, but also makes you crave to know more than what is just on the page.”

We were commissioned by the late PL Bhandhari’s family to collate and edit a number of his previous works into one, updated edition of his stories. By focusing on an aspect of Bhandhari’s personality and style; we created a beautiful, modern paperback that achieved references in Wikipedia and worldwide sales. This is what some reviewers said: “An excellent read. You’d think that a book written by a diplomat would be heavy reading on weighty historical topics, justifying positions taken by himself and his government. However, P.L. Bhandari was also a journalist who puts a lot of humour in his writings. Rather than a heavy tome, P.L. Bhandari is the James Thurber of the diplomatic world. How Not To Be A Diplomat gives an entirely different view of history and the characters who were there. He does not just recount his successes, but also many of his failures and disappointments as well – that gives the whole book a reality not found in heavier works. Many will find his startling encounter with guru Paramhansa Yogananda most interesting.”

“Something like an ‘It shouldn’t happen to a vet’ for the diplomatic set mixed up with just a touch of ‘Mad Men’ chic. A great collection of gently amusing anecdotes from a truly fascinating life. Personal highlights include our hero being caught out after an overly boozy lunchtime by his little girl, having his life saved by a noisy and rather smart pet hound and his friendship with an enigmatic man about town who turned out to be rather more wooly than anyone had suspected. All set in a most evocative post war world of intrigue and high politics. A great read and an excellent gift too.”